Written by Lewis Rowland on 17 January 2014. Posted in The Garrison

Nearly 5 months on from the Twitter meltdown after Arsenal secured the signing of the best number 10 in the world from Real Madrid for a club record fee, Arsenal sit top of the pile, with the very real chance of winning the Premier League.

Now to talk more about our new £42.5m signing from Madrid, Mesut Ozil. Never have I ever seen so much expectation of such a player in my whole life. It’s like every time he is on the ball people expect him to stop global warming or cure cancer. If he doesn’t get an assist every game, people start to question his credentials. Has watching Lionel Messi and Cristiano Ronaldo week in week made the football world go crazy? Or is this simply another case of YouTube Scouting Syndrome, better known as YTSS. 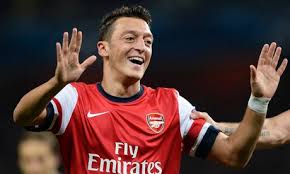 Not a day goes by where I don’t see a tweet, comment or a pundit speaking via a media outlet about how Mesut Ozil hasn’t been ‘all that’ so far. It drives me absolutely bonkers; I mean what games are you watching? This fast life of sacking managers after 10 games, microwaveable burgers and mobility scooters for fat people, has led to asinine, fatuous imbeciles expecting the impossible from footballers.

For a player who has spent the last 3 seasons playing for a side which have Cristiano Ronaldo smacking in 70-80 goals a year, in a league that is a completely different ball game to the Premier League, 4 goals, 7 assists, creating the 5th most chances in Europe and being part of a side that tops the toughest league in the world, isn’t that bad of a start to a Premier League career in my books.

Critics seem to have this annoying obsession with comparing Ozil to when he was at Madrid. ‘This isn’t the Ozil we saw at Madrid’, is a comment I’ve heard multiple times from Arsenal fans and pundits, on social networks and radio phone in shows across the board. Well let’s get a few things straight; Real Madrid played a completely different way to Arsenal when Ozil was at Real Madrid under Mourinho. Real Madrid played with far more pace, playing counter attacking football, cutting teams apart for fun. Ozil was given much more of a free role at Madrid, whereas at Arsenal he is really part of a team unit defensively and offensively, of course still given somewhat of a free role with us, but to a lesser extent.

We can see so far at his time at Arsenal he has had far more touches of the ball, and is included in more phases of the play, we can tell this just by looking at the amount of passes Mesut Ozil averages per game at Arsenal compared to at Real Madrid, almost double that of his tally from last term. Arsenal plays much more of a possession based game than Real Madrid, averaging higher amounts of possession as well as passes per game. During Mesut Ozil’s time at Real Madrid, Mourinho encouraged a counter attacking philosophy which sacrificed possession and really allowed Ozil to take up dangerous positions, using his pace, dribbling and incisive passing to devastating effect.

Arsenal have the potential to be an extremely good counter attacking football team, however it has always been Arsene Wenger’s philosophy to keep hold of the ball and pass it around, aiming to break teams down. This means Ozil has to pick up the ball with many more opposing players in front of him, making it far more difficult to dribble past players with his pace and guile, instead Ozil must be more patient and of course work harder to find holes in the opposition defences with his incisive passing. Having the ball more inevitably leads to higher numbers of turnovers and chances of being dispossessed hence the increase in the amount of turnovers and dispossessions per game for Ozil in an Arsenal shirt.

Despite being asked to play a more patient game, Ozil has still created 48 chances this term, already on his way to either bettering of equalling his tallies from the previous two seasons. Pretty impressive considering the factors mentioned above. Also Ozil has a higher pass completion rate than his last two seasons at Real Madrid, although averaging more passes per game, a lot of those passes are part of build-up play and less incisive but has still illustrated his ability to keep hold of the ball. Mesut Ozil has never been a prolific goal scorer, neither at Real Madrid nor Werder Bremen, or even Germany for that matter. It is certainly an area he can improve on, and 4 goals from 16 games is about the same as what he averaged in La Liga for Real Madrid last season and already the same as what he ended 2011/2012 season with.

My conclusion is that this is the same Mesut Ozil in terms of productivity we saw at Real Madrid, he still takes up positions on the pitch that none of our other players take up. Maybe if you sat on YouTube all day watching video of Mesut Ozil at Real Madrid you could be forgiven (or not) for thinking that Ozil has yet to show the form he showed at Real Madrid. The fact is Ozil is being asked to play in a different team, in a different league, under different tactics using a completely different philosophy. Yet he is still on course to match his highest ever goal tally, as well as matching his highest ever assist tally in the League. Not forgetting the amount of chances he makes on a weekly basis either, which he is due to either better or equal for his previous 2 seasons at Madrid, as mentioned earlier. This is the perfect example of why watching just YouTube videos of players is an extremely dangerous way of judging players. What you don’t see in YouTube videos is how the player's team is set up, how the player originally gets into the positions you see the clips of and his other contributions to the team throughout the match. I’m reasonably confident that anybody who has watched Mesut Ozil consistently in La Liga will agree with me that this is the same Mesut Ozil that was at Real Madrid. I am not for one minute saying we have seen the best of Mesut Ozil, because we haven’t, he has definitely had some off games, but he also had off games for Real Madrid, he is human after all. But don’t make the mistake of thinking that Ozil was in the Messi and Ronaldo calibre of productivity in La Liga, just because it may look that way on YouTube. The fact remains that this is all still new for him and is already the 2nd most productive player in the league in terms of chances created and 2nd most assists in the League also. Now for a player who has only been here 5 months, that is pretty fucking amazing. Just imagine what he will be like once he gets a whole season under his belt. It’s a pretty scary thought isn’t it?

I’ll leave you on that note.

Thank you for reading, comments appreciated.

@Lewbob91 Tell us what you think! If you agree, or have a different view, please leave a comment in the comments section or why not write a response or your own article on YouWrite?